Swifts in the City is a conservation project focused on chimney swifts - a "near-threatened" bird species. Chimney swifts are pretty amazing and entertaining critters whose populations appear to be declining quite drastically (i.e., IUCN “near threatened” in the US, COSEWIC “federally threatened” in Canada).

*This project is sponsored by the Sassafras Audubon Society 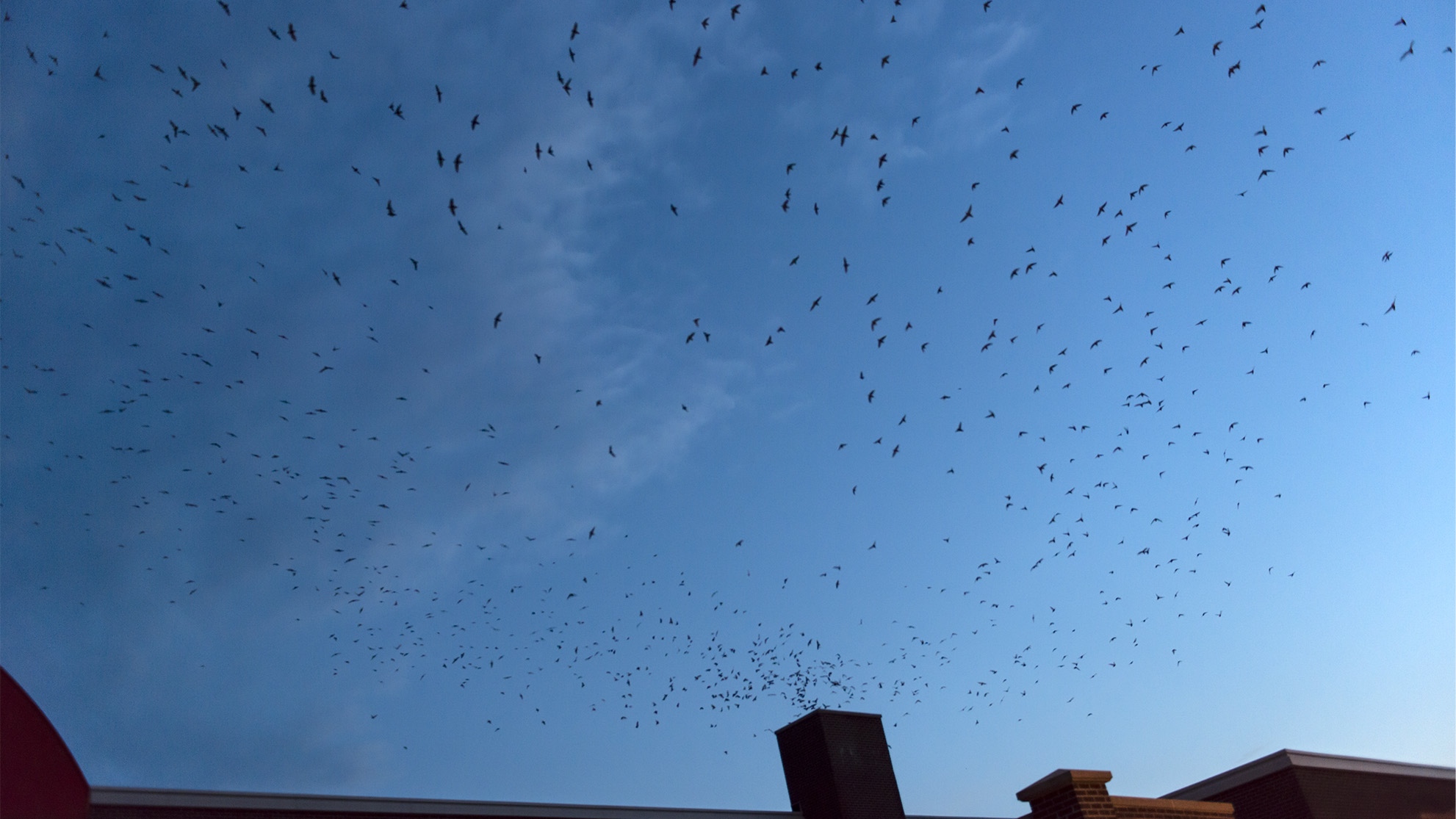 Swifts not Bats! (photo credit: Dr. Roger Hangarter). Chimney swifts breed in North America from ~ March - October. So, we aren't typically using our fireplaces then. Still, make sure to check your fireplace for birds before you build your first or last fire of the season.

Examples of other chimney swift 'towers' from all over the country 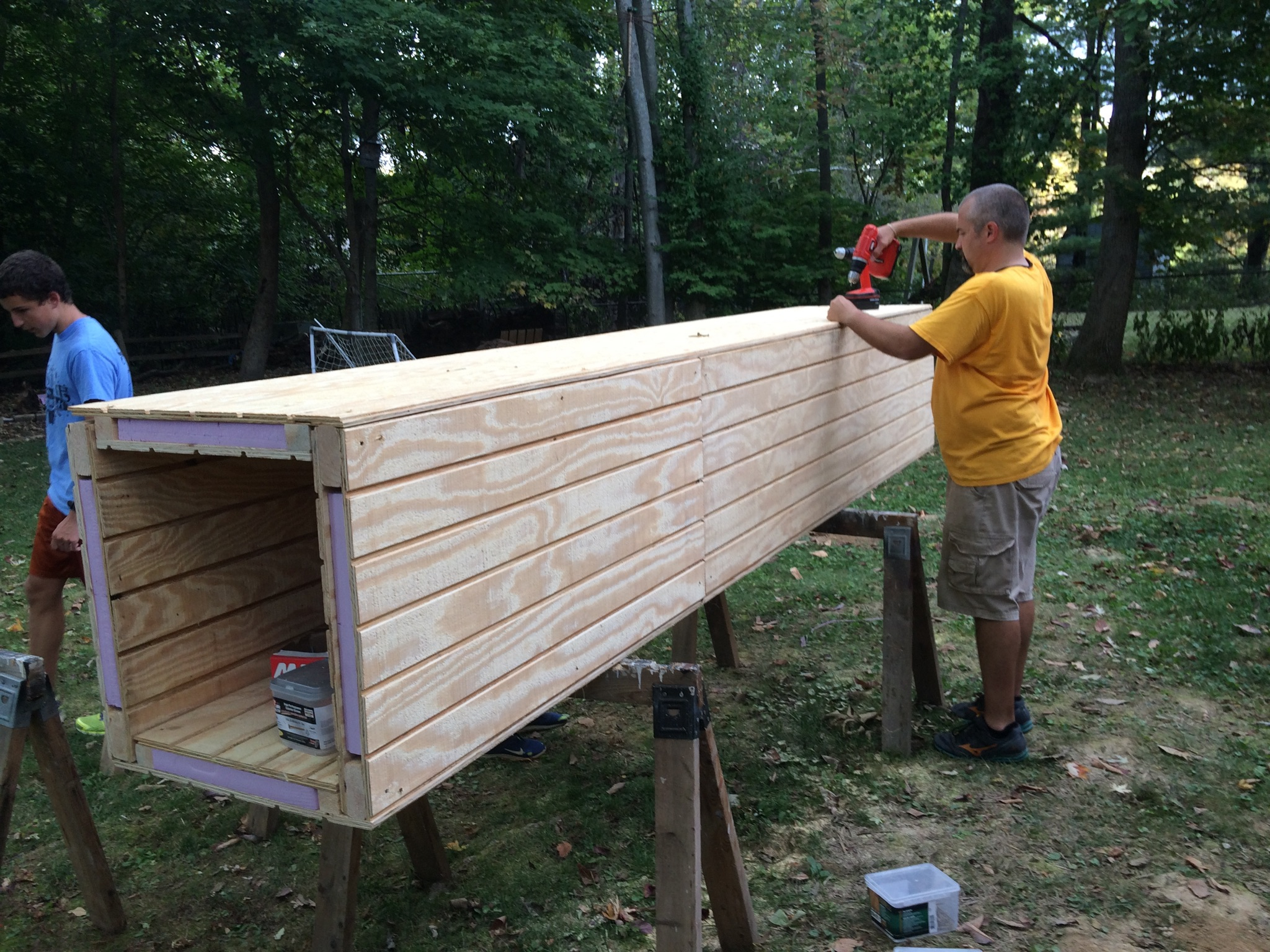 Construction on our second tower by Eagle Scout William Dixon with help from his father and funding support from Oliver Winery. This tower will be located at Harmony School thanks to help from teacher Emily Sprowls! 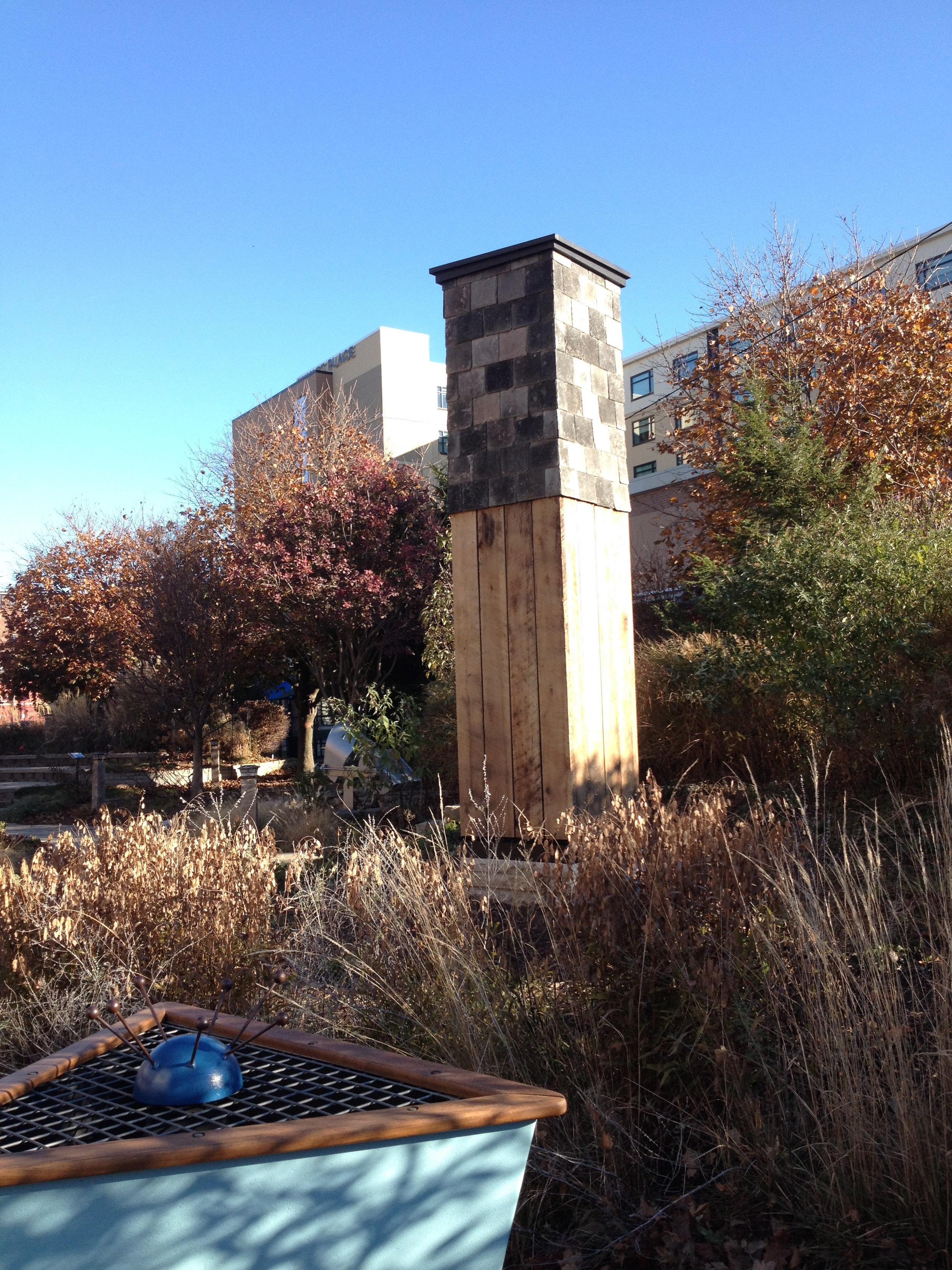 Our first tower in the WonderGarden at WonderLab museum construction of the tower was completed in November of 2015. Thanks to Rusty Peterson for the design and craftsmanship. Rebecca Thomas did an amazing job with the finishing touches (installing all of those lovely repurposed slate shingle was quite a chore). Thanks to volunteers from WonderLab for helping with the 'tower raising' and thanks to Atomic Electric for help with digging that serious foundation and prepping electrical work for the cameras!

Some artwork from art-science classes focused on city birds in general and of course....chimney swifts in particular! Thanks to IU grad student Rachel Hanauer and undergrad Katherine Griebel ! 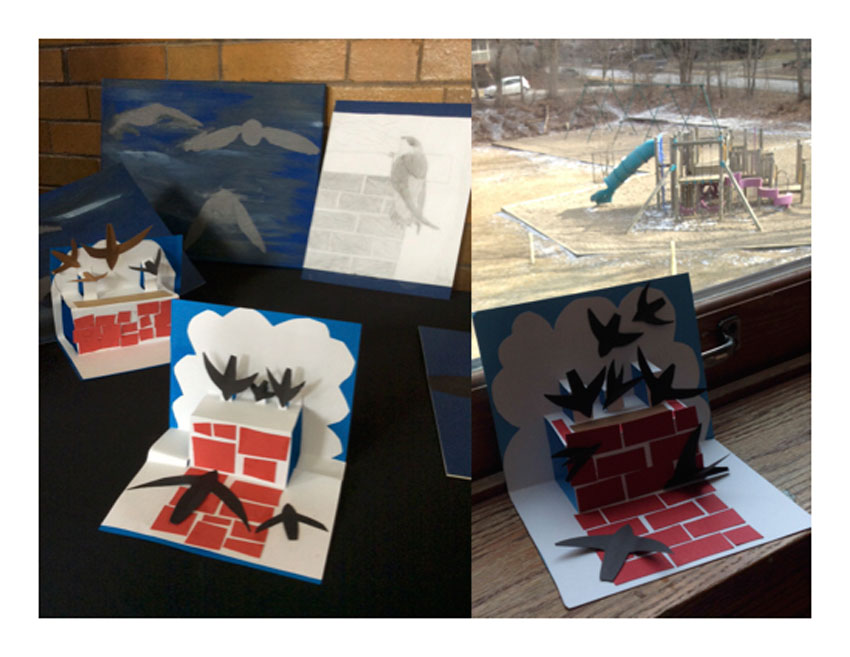 Pop up cards! These were so fun to make. Thanks to Harmony school teacher Kathy Boone for providing the opportunity, charism, and supprt and special thanks to parent volunteer Shannon Krasnov who designed these fun information packets (the front of the cards have 'Swift Facts') 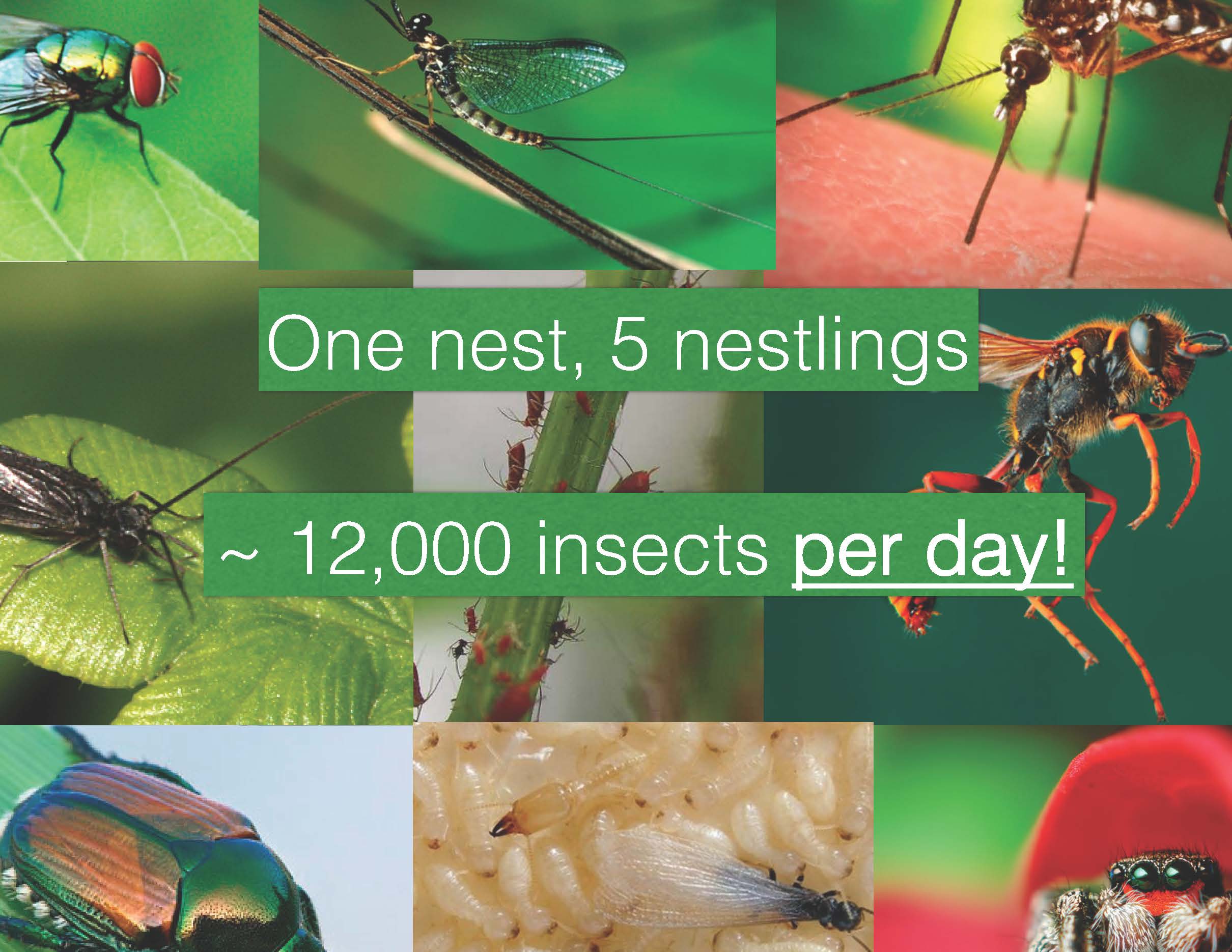 Chimney swifts are aerial insectivores that eat insects all day long. This makes counting the insects that adults eat logistically challenging. So instead, researchers counted and identified the insects that parents brought to feed to their nestlings. A typical nest contains ~ 5-7 babies. Parents feed their babies every 30 min for ~ 20 days....that really starts to add up! AND, they are eating many insects that we typically consider pests (e.g., mosquitos, termites, aphids).

Chimney swifts provide free insect control....they eat 1000's of insects every day. If you have a brick and mortar chimney (i.e., with a rough interior for the birds to cling to), then you can modify your chimney cap to make it swift friendly.


'Swifts in the City' has two main goals:

Chimney Swifts (Chaetura palegica) appear as silhouettes dancing through the sky, chattering away, and eating insects from dawn until dusk. Large colonies form tornado-like funnels as they descend into chimneys at dusk and are often mistaken for bats.

These large colonies appear most often during peak migrations; migrating individuals share roosting habitat during the long journey to South America. The large size of these colonies is misleading, however, because Chimney Swift populations have been declining sharply since the ~1960s (i.e., IUCN “near threatened” in the US, COSEWIC “federally threatened” in Canada). While the causes of these declines are manifold, loss of breeding habitat (e.g., hollow trees, un-capped masonry chimneys) is the primary culprit behind these declines.

Historically, chimney swifts preferred hollow trees as nesting and roosting sites. However, as European expansion replaced forests with towns this resilient species adapted by using chimneys. More recently, however, the increased use of chimney-caps and fabricated chimneys has made finding suitable habitat challenging. This gregarious species roosts (i.e., rests and sleeps) communally.

However, only one pair breeds at each site (as a territorial species they require ≥ 10 ft. in between nesting sites).

Here is a list of great resources to help you build your own tower, modify your chimney, or just learn more about these amazing birds.

We are also involved in Outreach programs that teach science through the lens of art.
These programs include art-science classes at:

Sassafras Audubon Society (SAS) has taken on this project as one of their focal conservation programs. SAS previously helped protect a large chimney swift colony at Fariveiw Elementary by working with other community partners to construct a free standing chimney just for swifts! Read more:

Our community partners on this project include:

Swifts in the City is supported through generous contributions from:


Want to get Involved?

We have several long-term goals with the project. These include:

(2) Gathering more detailed data on breeding and hatching success at multiple sites across multiple geographic locations. These data are essential to developing more predictive models that will be essential to management strategies. In order to accomplish this goal, we need technologically savvy partners.

You can help by collecting and submitting detailed observations of counts of chimney swifts (or nestling survival if you have nest cameras) using sites to sites such as the Cornell Lab of Ornithology's eBird are a great place to contribute your data. eBird

If you would like to donate to or volunteer with the Swifts in the City project or for more information on other, ongoing projects with Sassafras Audubon Socity please visit